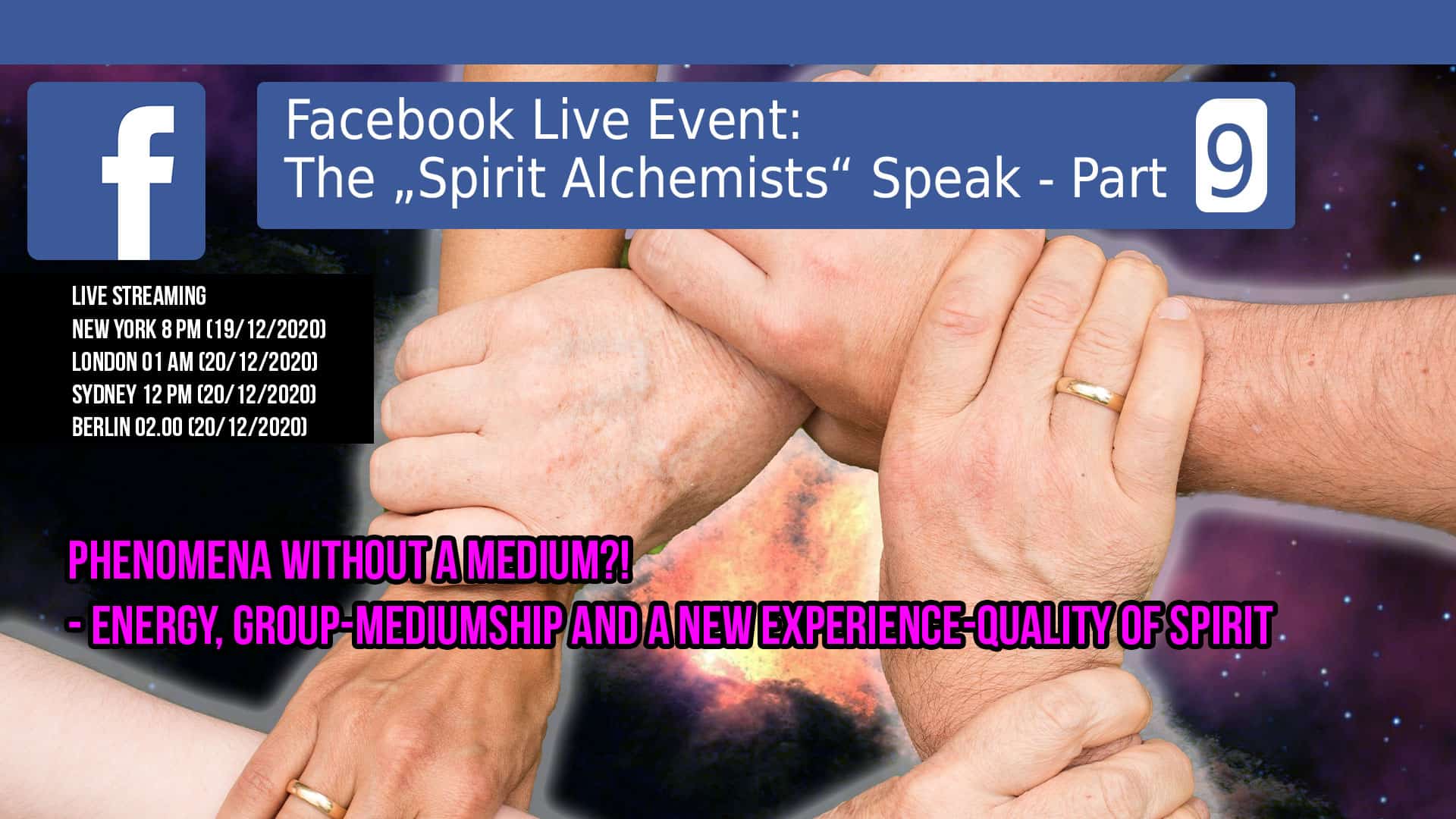 Phenomena without a medium?!
– energy, groupmediumship and a new experience-quality of spirit

Can we witness (physical) mediumistic phenomena without the classical participation of mediums? And without the presence of the (physical) séancerooms basic framework ‘ectoplasm’?

When the Scole Groups Chairman Robin Foy did claim that in the late 2000nds an outcry was erupting from the teaching halls and spiritualistic institutions!

Not that they were in any state or form condoning Physical Mediumship and it’s techniques and conditions at all – quite the contrary was the attitude for decades – this assumption was regarded and felt as an attack onto their undisputable own inalienability.

But it didn’t wanna go away and the whole Scole Groups environment (varying numbers of sitters around a core group of founders, including two Physical Mediums and later Senior Research Officers of the SPR) was more and more often talking about what the spirits had taught and even demonstrated them repeatedly: A seemingly spirit-related newly invented ethereal communication-agency, called ‘energy’.

Circumnavigating the regularly described ‘dangers’ in ectoplasm-based mediumship ‘energy’ was allegedly capable of reproducing a lot of phenomena formerly only known as being ectoplasm related, without any dangers to get burned and such when people misbehaved in the séanceroom!

So what is behind the claim of the ‘Scole Groups’ spirits and how far does it play a role today with its massive implications?

Let’s hear the Alchemists dive into and dissect this extraordinary claim!

Directly from the legendary Felix Circle Séanceroom,
experience the spirit team live and online
via facebook-live (with costs).

Listen to this spirit team of Modern Physical Mediumship at 10 evenings, when they want to reveal their secrets!
Additionally Julia will forward your questions, when allowed!

Like no other spirit team ‘the spirit alchemists’ have attracted interest from the Psychic or Spiritualistic communities with their extraordinarily meaningful Messages and Phenomena. That ranges from Messages to the human species about paradigm change, or from deceased loved ones via their partial or even full materialisations of human hands, heads, faces and even fully materialized spirit phantoms in the séanceroom, over the materialisation of objects in good red light, illuminated apparitions of all sorts, ectoplasm, body-portals, handwritings from the deceased, up to psychokinesis, ET’s and a l.m., partially demonstrated under scientific conditions.

What are the spirit-teams motives and where lie their origins?

Take part in the trance-work of the ‘spirit alchemists’ at 10 evenings, when you comfortably from your desktop and with headphones on are connected with Julia, who will moderate from her vast personal experience background the evenings and overhand the questions to the spirit team.

Every participation in these approximately 1 hour sessions (hosted by Julia Muegge) costs 35 Euro and will be broadcasted live from the Felix Circle Séanceroom.

You have the right to cancel this contract within 60 days without giving any reason. The cancellation period is fourteen days from the day the contract is concluded.

All live broadcasts take place via Facebook. So you need a Facebook account to take part in the events!
Each live broadcast remains available to you for at least one month (30 days) as a recording.
The name of the Facebook group (each transmission takes place in a group created especially for this occasion) is:
“Kai Mügge – The Alchemists Speak – Part 9”
As soon as you have paid this appointment you have to join the group. Do not wait until shortly before the transfer and do it right after payment!

If your Facebook name does not match your real name, it is important to state your real name when you join the group so that we can connect your payment with your name.